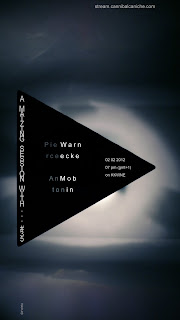 PIERCE WARNECKE (usa) : custom software, objects
Pierce Warnecke’s work stems from his interest in the effects of time on matter: modification, deterioration and disappearance. He distills objects, data, sounds, images via repetitive processes until they approach true abstraction.
Whether focus is on the purity of digital forms or the chaotic grit of natural objects, large scales of time and space or microscopic detail, the goal of Pierce’s work is to readapt existing materials into a parallel context where their signified meanings, symbols and cultural connections have become residual ghosts.
He has performed with artists such as Phill Niblock and Gino Robair, and tours regularly in Europe and the US. He has presented his works in such places as Harvestworks (NY), GASP Gallery (Boston), Luggage Store Gallery (SF), AMODA (Austin), Le Labo (Toronto), Main d’Oeuvres (Paris) and Ausland (Berlin).
The piece ‘Isolation’ will be released on cassette by Semata Productions in early 2012.
ANTON MOBIN (fr) : prepared chamber, objects