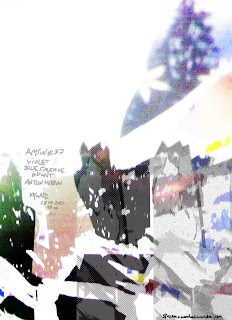 VIOLET (usa)
Jeff Surak is Violet.
Since his early recordings under the name -1348-, Jeff Surak established himself in the international hometaper underground network of the 1980s, releasing tapes on the his own Watergate Tapes imprint, along with such artists as Controlled Bleeding, F/i, and Kapotte Muziek; and collaborating with icons like Zan Hoffman, Crawling with Tarts, and John Hudak. At the same time Surak performed with the notorious DC area industrial band New Carrollton.
Jeff Surak run the label Zeromoon and also directs the annual Sonic Circuits Festival in Washington DC, presenting such artists as Faust, Merzbow, Fennesz, Magma, Jandek, Phill Niblock, Wolf Eyes, Evan Parker, Matmos, Fckn Bstrds, Andrea Parkins, Elliott Sharp and hundreds of others... Jeff is called »the godfather of american noise« by Ukrainian MTV, and it's a real honour to welcome this veteran experimenter from Washington DC on KKWNE and in A Maïzing Session !