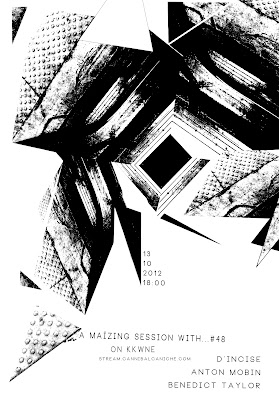 BENEDICT TAYLOR (uk) : Alto
Benedict studied viola at the Royal Northern College of Music and specializes in contemporary music, artistic collaborations and improvisation. He performs and records throughout the UK, mainland Europe and Asia as a soloist and ensemble performer with many kinds of groups including chamber music ensembles, improvisation groups, new music ensembles, electroacoustic groups and full orchestras, in many of the worlds leading festivals and venues. As a collaborative artist, he works with individual composers, modern dance and theatre companies, visual & sonic artists and filmakers. When not performing, Benedict works as a composer, with recent work for several art films being heard at international film festivals including Venice, Rotterdam, London & Toronto.

Electroacoustic musician, doing both composed and improvised works, from so called electronica to musique concrète, drone, EAI and post-reducionnism influences. He focuses mainly on generation and manipulation of acoustic sound sources and objects, loves feedbacks and digital glitches as well. He tends to extract the most tiny details of the elements, appreciates slowness and obsessive explorations of simple processes. He coordinates the Insubordinations netlabel, dedicated to improvised musics, and was actively inside the Audioactivity collective and netlabel, does graphic design and works sometime on sound installations. Deeply influenced by the free culture thinking he loves to share and spread its albums and creations on the web.

ANTON MOBIN (fr) : Prepared chamber
Host of the A Maïzing Session With...
"We are always in microcosms with Anton Mobin, small things that become audible, manipulations that ultimately create a kind of black hole and around it, a whole sound universe is organized : all will be suck up. Tension, respiration, rhythmic articulation, material analog, remote space."
(Darby Mullins, nov. 2011)