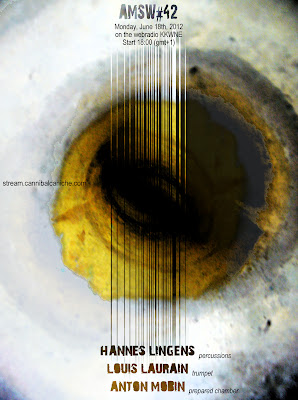 HANNES LINGENS (de) : floor tom / bass drum
Hannes Lingens is an improvisor/composer on drums and accordion. Born in Hamburg in 1980, he studied drums with Michael Griener and Guenter Baby Sommer in Dresden before moving to Berlin in 2006.
His interest in various forms of exploratory music gave him the opportunity to work with such diverse artists as Tetuzi Akiyama, Sven-Ake Johansson, Christof Kurzmann, Olaf Rupp or Matthias Schubert.
Ongoing collaborations include the groups OBLIQ, Hop Frog, Destination Out, Schulbus, as well as a duo with Pierre Borel (sax).
He has performed in internationally renowned festivals and venues throughout Europe, Japan, Israel and the USA.
In 2009 he co-founded the collective Umlaut Berlin which curates an annual Festival for contemporary and experimental music and is part of the international label and network Umlaut Records.

LOUIS LAURAIN (fr) : trumpet
The second Maïzing Session with Louis !
Born in 1984, he taught himself to play the trumpet and then studied jazz and improvisation at the conservatories of Lyon (CNR) and Paris (CNSMDP). While developing his own personal and original language on his instrument, he researched, through different collaborations, an intuitive and spontaneous approach to music. His interest is essentially in different forms of improvised music for various formations,ranging from solo to orchestral.
His work is focussed principally on two topics. Firstly an accoustic approach to instruments through research on sounds and sound effects in relation to the space in which they are produced. Secondly work on the amplification of instruments (“close miking”) with the aim of creating the illusion of an electric or electronic “machine instrument”.

Radio producer, improvisor, sound artist, Anton Mobin develops an intuitive, energetic music and done wonders for the self-confidence by any elitist codes which the improvised music. Anton makes his own instruments called "prepared chamber" and in which are ordered swith microphones and objects of the everyday life, mostly hijacked from their first use.
Minimalist loops, radio moments, peaks of sound intensity and fragments of autonomous sounds freed from their context, without any reference are so many elements which characterize Anton Mobin's performances.